Let us promote your website on all major Hispanic Search Engines! 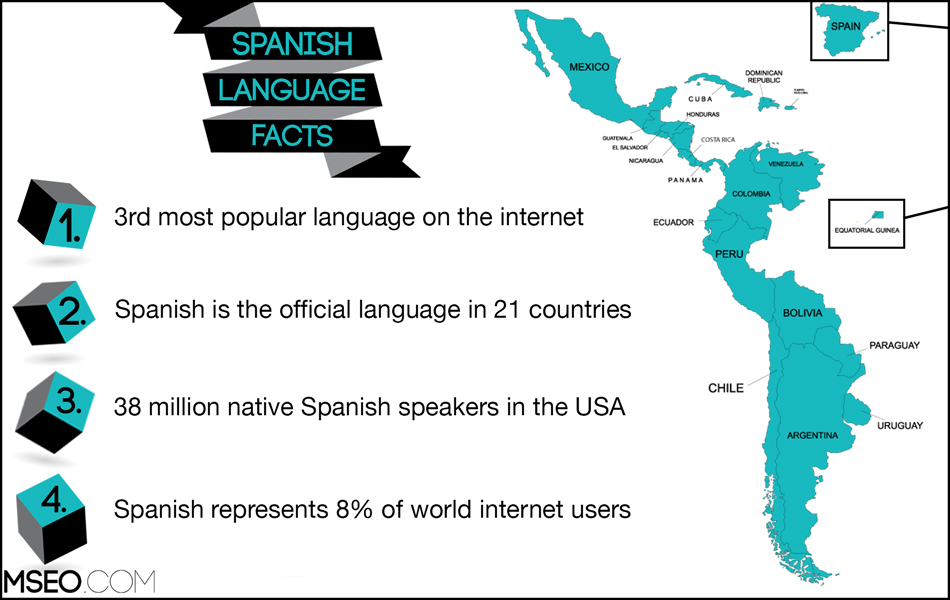 In order to be featured on Hispanic search engines, it is necessary that your website is localized in Spanish, either partially or entirely. Spanish website localization refers to the process of translating your current website into Spanish, conducting Spanish keyword analyses, implementing Spanish SEO, and integrating the localized Spanish pages onto your website so that you can have eligibility to rank on Hispanic search engines.

Contract our Spanish experts to create an entry page, multiple pages, or a full-website translation in Spanish for your website optimized with your Spanish keywords/meta tags. As a multilingual SEO company, our primary focus is to deliver culturally and semantically accurate translations while aiming to maximize organic-rankings of targeted foreign-keywords.

Originally branching off from Latin, the Spanish language is now spoken by over 410 million people as their mother tongue. It is most widely spoken in South America, Latin America, North America and Europe, primarily Spain. In fact, Spanish is the third most commonly spoken language in the world after English and Chinese. In the United States alone, about 40 million people speak Spanish as their mother tongue and the United States is actually home to the fifth largest Hispanic population in the world.

The Spanish language is also considered to be one of the easiest languages to learn because it is phonetically spoken. Although the Spanish language changes in pronunciation and vocabulary from country to country, almost all Spanish-speaking people readily understand the original form of Spanish. Concerning the Internet, the Spanish speaking population accounts for about 257 million Internet users (an estimated 8% of all worldwide internet users), making it the third highest in the Internet community after English and Chinese.

The Spanish language is extremely present in world affairs as one of the official languages of the European Union, the United Nations and many other international firms and organizations. Due to a quickly mounting birth rate in Spanish-speaking countries, it is possible that Spanish-speakers may exceed English-speakers in the Americas in the future. From a business perspective, it is essential to tap into the Spanish-speaking market to have a presence internationally.

Get a quote to localize your website into Spanish today!