Let us promote your website on all major Norwegian Search Engines! 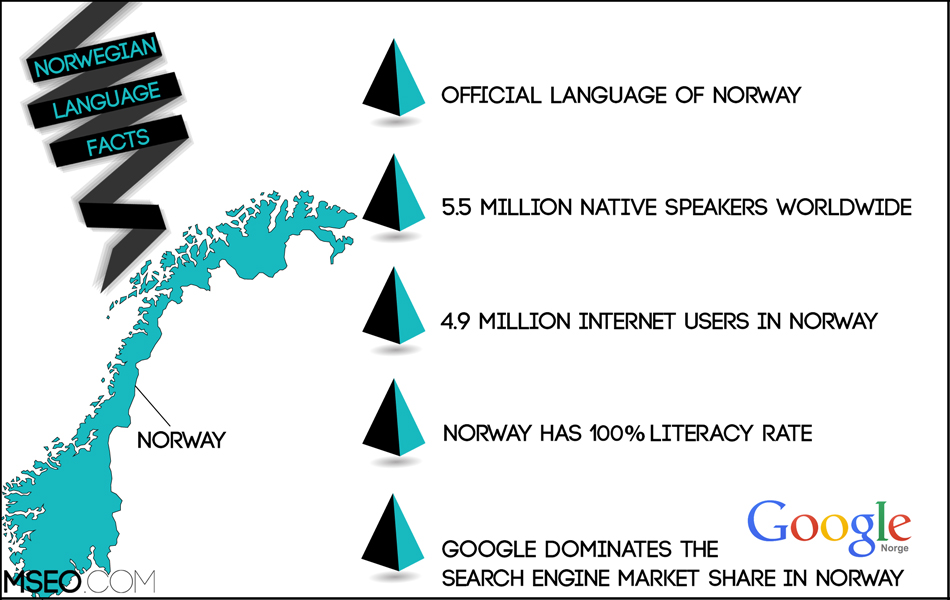 Contract our Norwegian experts to create an entry page, multiple pages, or a full-website translation in Norwegian for your website optimized with your Norwegian keywords/meta tags. As a multilingual SEO company, our primary focus is to deliver culturally and semantically accurate translations while aiming to maximize organic-rankings of targeted foreign-keywords.

The Norwegian language is a Scandinavian language spoken by about 5.5 million people in Norway, some Scandinavian countries and parts of North America. The language began spreading during the Viking age. Today, Norwegian is made up of two major forms called Bokmal and Nynorsk, which are both the official languages of Norway, currently equal in usage. Still, a person speaking Bokmal will easily understand someone speaking Nynorsk and the other way around. Norwegian is closely related to Danish, as Denmark and Norway were once the same country around 1397.

Norway and the Norwegian speaking population have a high standard of living, one of the highest per capita incomes. Along with a very strong educational system, it is one of the very few countries in the world that boasts a 100% literacy rate. Norway has a population of some 5 million Norwegian speakers possesses the second highest GDP per capita in the world. Its economy relies heavily on its waters, which provide oil, fish and hydroelectric power. Although Norway has still not joined the European Union, it has shown vast economic growth in the past years, which is mostly due to some oil deposits found in its waters recently. Concerning the Internet market, around 4.5 million people access the Internet in Norwegian worldwide. The Norwegian speaking population represents a big part of the Scandinavian markets and offer great potential for business.

Get a quote to localize your website into Norwegian today!