Let us promote your website on all major Japanese Search Engines! 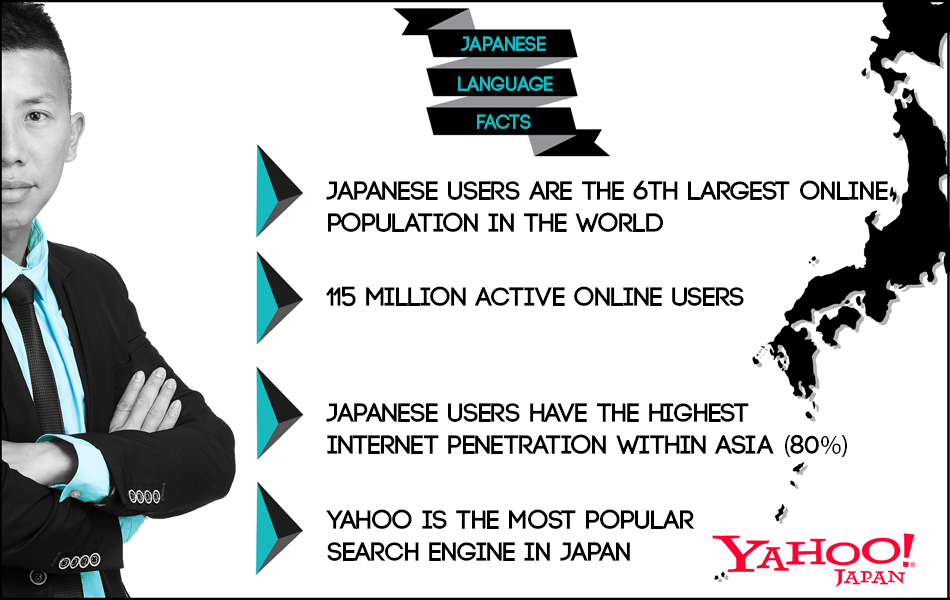 In order to be featured on Japanese search engines, it is necessary that your website is localized in Japanese, either partially or entirely. Japanese website localization refers to the process of translating your current website into Japanese, conducting Japanese keyword analyses, implementing Japanese SEO, and integrating the localized Japanese pages onto your website so that you can have eligibility to rank on Japanese search engines.

Contract our Japanese experts to create an entry page, multiple pages, or a full-website translation in Japanese for your website optimized with your Japanese keywords/meta tags. As a multilingual SEO company, our primary focus is to deliver culturally and semantically accurate translations while aiming to maximize organic-rankings of targeted foreign-keywords.

Japanese is a member of the Altaic language family, the official language of Japan and is spoken by about 122 million people. Japanese is actually one of the ten most widely spoken languages in the world. In the United States alone, there are over 445,000 native Japanese speakers though the majority of Japanese-speaking natives are located in Japan and the neighboring Ryukyu and Bonin islands. In addition, Japan and the Japanese speaking population rank number four in the world for the highest number of Internet users with over 100 million Japanese Internet users (an estimated 4.7% of all worldwide internet users). The written language of Japanese is spread into four different forms in which Hiragana, a written form of Japanese using simple words and Japanese syllables, is the most often used and taught.

The three strongest players in the Asian market are China, India and Japan. Japan’s population of around 127 million people has long been a powerful economic power with a GDP of about 5.96 trillion dollars.

In fact, Japan holds the third largest economy after the US and China and is the second most technologically powerful economy in the world. Due to the role that Japan and the Japanese speaking population play in the Asian market, it is vital to access those markets for a well standing position in the Asian business market.

Get a quote to localize your website into Japanese today!