Let us promote your website on all major Dutch Search Engines! 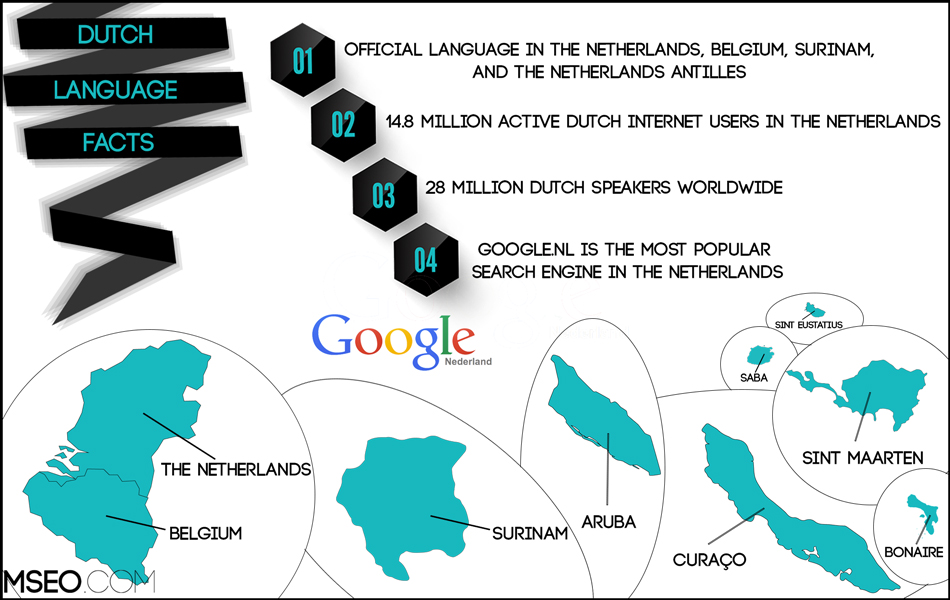 In order to be featured on Dutch search engines, it is necessary that your website is localized in Dutch, either partially or entirely. Dutch website localization refers to the process of translating your current website into Dutch, conducting Dutch keyword analyses, implementing Dutch SEO, and integrating the localized Dutch pages onto your website so that you can have eligibility to rank on Dutch search engines.

Contract our Dutch experts to create an entry page, multiple pages, or a full-website translation in Dutch for your website optimized with your Dutch keywords/meta tags. As a multilingual SEO company, our primary focus is to deliver culturally and semantically accurate translations while aiming to maximize organic-rankings of targeted foreign-keywords.

Dutch is spoken by about 28 million people in a number of old Dutch colonies and countries including Australia, Canada, France, Germany, Indonesia, Israel, Philippines, UAE and the USA. It is the official language in countries such as the Netherlands, Netherlands Antilles, Aruba, Belgium and Suriname. Dutch is classified as a West Germanic language and is made up of a couple varieties including one called Flemish, spoken by about 8 million people in Belgium. The Dutch language itself, is also said to be one of the closest related languages to English in the world. In addition, the Dutch speaking population is Internet friendly with about 14.8 million Internet users in the Netherlands itself (about 88.6% of the population accesses the Internet).

Although Dutch is spoken worldwide, it exists primarily in the Netherlands and neighboring European countries. The Netherlands is situated directly next to Germany and above Belgium, where there are a good number of Dutch speakers as well. With a population of 16.77 million people, the Netherlands is considered to be one of the most densely populated countries in the world when compared to the size of the country.

The Netherlands itself is involved in European business affairs, the United Nations, the European Union and receives a fair amount of business from tourists, international organizations and foreign direct investments. Representing an important part of the European Union, the Dutch-speaking markets are essential to fully access the online European market.

Get a quote to localize your website into Dutch today!