Let us promote your website on all major Arabic Search Engines! 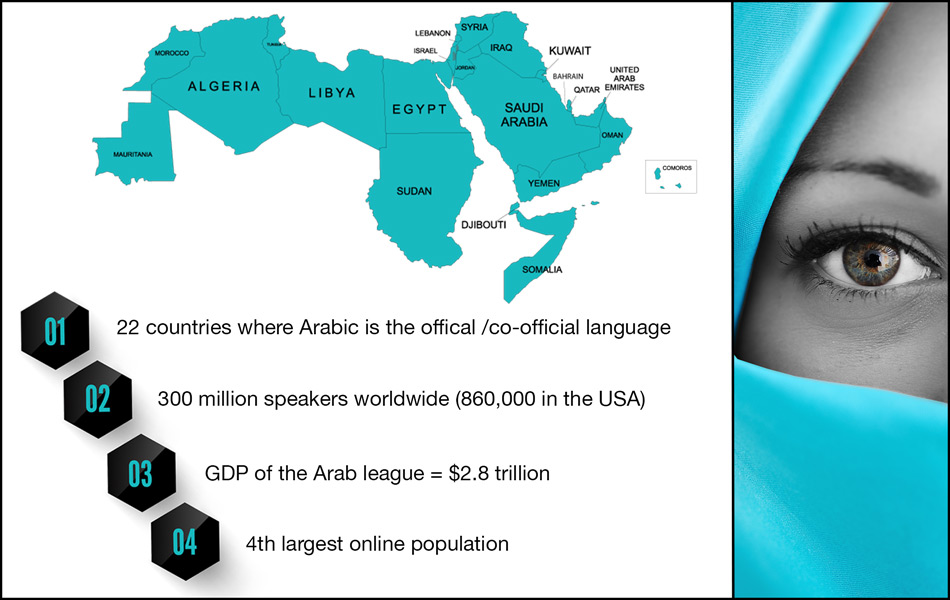 In order to be featured on Arabic search engines, it is necessary that your website is localized in Arabic, either partially or entirely. Arabic website localization refers to the process of translating your current website into Arabic, conducting Arabic keyword analyses, implementing Arabic SEO, and integrating the localized Arabic pages onto your website so that you can have eligibility to rank on Arabic search engines.

Contract our Arabic experts to create an entry page, multiple pages, or a full-website translation in Arabic for your website optimized with your Arabic keywords/meta tags. As a multilingual SEO company, our primary focus is to deliver culturally and semantically accurate translations while aiming to maximize organic-rankings of targeted foreign-keywords.

Arabic is one of the oldest languages in the world that today is spoken by over 295 million people in about 24 different countries. It is the official language of Algeria, Bahrain, Comoros, Chad, Djibouti, Egypt, Eritrea, Iraq, Israel, Jordan, Kuwait, Lebanon, Libya, Mauritania, Morocco, Oman, Qatar, Western Sahara (SADR), Saudi Arabia, Sudan, Syria, Tunisia, United Arab Emirates, and Yemen. There is a form of Arabic called Modern Standard Arabic, which is understood by most Arabic speakers and is often used in international organizations. In fact, Arabic is one of the official languages of the United Nations and is mostly spoken in the Middle East and Northern Africa. Arabic writing is varying as well, is extremely complex and often does not even compare to its spoken form. Arabic is considered the sixth most spoken language in the world even though the Arabic language is spread into many varying forms. In the United States alone, there are over 860,000 Arabic speaking people.

The total number of Arabic speaking internet users is now at approximately 168 million and growing constantly. Many Arabic nations enjoy great wealth due to the huge oil reserves found in those regions thus making the Arabic population an important factor on the global market. In fact, the entire GDP of all the Arabic nations amounts to about $2.8 trillion. In addition to their wealth from the oil, there are countless investment opportunities, business projects, international organizations, etc., in Arabic countries as well. Due to the size of the Arabic markets and the opportunities available on this growing online market, it is obvious that the Arabic speaking population has great potential for business online.

Get a quote to localize your website into Arabic today!