Lets not confuse being bilingual and being a translator! 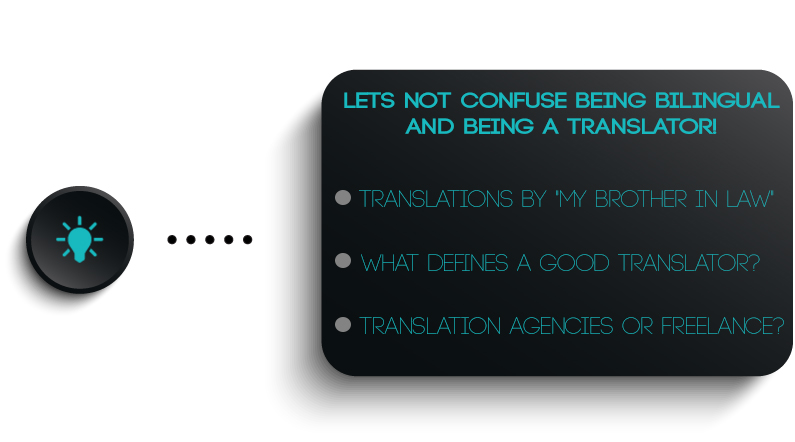 Excerpted from an interview of Richard M. Gonzalez conducted by Fabian Medina, PR Dept. of https://www.mseo.com

What is the biggest mistake that people make when contracting a translation agency or a freelance translator?
People confuse being bilingual with being a translator.

What do you mean?
Oftentimes I will hear from customers and business prospects, “I will get this translated by my wife…she’s from Mexico” – “I will get your Chinese translation reviewed by my brother-in-law…he is from China“, etc., etc.
Well, I can only say that it is not because someone was born and raised in the US that I would use such fact to benchmark his copywriting abilities in English!
It is not because someone is from France that such person is a qualified French translator…such person may have averaged a “C-” in French when in school! As far as I am concerned, being bilingual does not qualify someone as a translator.In the US, mainly, where there are few polyglots, being bilingual is generally perceived as being able to translate from English into the native language of the speaker…Big mistake!

How can someone evaluate the quality of a translation?
Commenting on a translation is very arbitrary. Sentences can be worded in many different ways. Languages like French, German or Russian feature a larger “vocabulary database” than English, for example, thus increasing the “synonymous leverage” for the translation experts. Basically, in most cases, there is just not only-one-correct-way to translate a specific text.

What defines a good translator?
There is an art to translation. Even someone well qualified in his native tongue might not necessarily be a good translator. I know excellent bilingual copywriters who just hate to translate…and who can do a good job without at least a little passion?!?
A good translator knows how to paraphrase, thus respecting the idiomatic context. In my years of working with translators, I can only stress that, once again, experience makes the difference! As we all know, translations cannot be literal: texts need to be reassessed & phrases reworked in order to deliver cultural accuracy. In other terms, not only must a translator be a good copywriter, but also such individual needs to have knowledge of the cultural ramifications involved with each specific translation.

So what do you advise?
When hiring a new translator, I strongly advise considering someone qualified with a portfolio of 100,000+ words minimum – check references extensively – Google the name of the translator, since such individual should have a presence on the various translation-related blogs & forums…
One more piece of advice: When you receive your Japanese translation, do not ask your “good Japanese friend” to check for accuracy…Once again, in most cases, such individual might not be qualified to evaluate the quality of a translation.

Any other advice?
Yes. Do not shop for the cheaper deal! Good translators are generally educated individuals who deserve a fair remuneration for their work.

Do you advise to work with translation agencies or free-lance translators?
This is a very personal choice…I know that well financed companies usually would rather work with reputable agencies because of the guarantee which stands behind their corporate entities… but let’s not kid ourselves: from a translation quality perspective, working with an agency or with a translator directly generally ends being the same. In fact, translation agencies are usually businesses that have established good relationships with freelance translators!

When considering the translation of a website, what is your priority?
I am privileged to work with SEO-trained native translators which is a qualification becoming more and more a necessity for anyone considering the translation of a website. We all know that in today’s internet context, it is mainly the content of a website which defines its ranking eligibility. In other terms, there is an art to enhance a translation through SEO friendly texts. Unfortunately, SEO knowledgeable good translators are “far and few between”, however, on the bright side, an increasing amount of professionals are getting trained every day! Although too premature to forecast or just naively optimistic, I believe that by late 2015, there will be a redundant pool of professionals offering SEO-correct translations.