In today’s globalized world, a true international online presence is not an option! 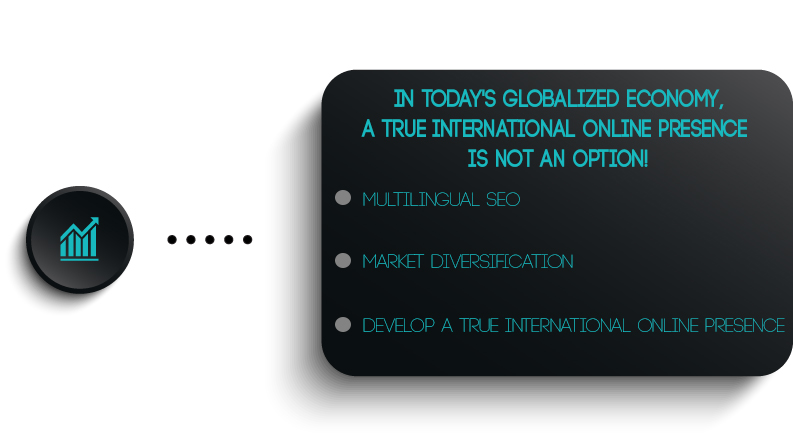 I decided to write this article as I just received the most absurd feedback from a potential customer interested in the Multilingual Search Engine Optimization services offered by MSEO. Basically, I was speaking to a lady located in the New York area who was interested in promoting her website on foreign search engines in 5 languages (Japanese, French, Spanish, German and Russian).

Although she obviously understood that her website would greatly benefit from such international presence, she was hesitant to move forward “due to the recession” according to her wording, which almost sounded like a mantra (she only repeated  the word “recession” 8 times during a 15 minute conversation)! Surprisingly 58% of US citizens still share this ideology.

If she was considering investing in real estate or on the stock market, I would probably understand such a cautious approach (my example might not be the most pertinent since fortunes are always built from the real estate & stock market fields in times of recession/depression!). Anyway, in her case, we are talking about developing a true international online presence by promoting a website on foreign search engines! We are speaking about having her website being found on the Japanese Google when a Japanese user types her keywords in Japanese (using Japanese characters) or, again, when a Russian user types the same keywords in Russian on Yandex (the leading Russian search engine)!Back to my story: As the lady I was speaking to was trying to justify her indecisive attitude, for not saying that I kept on being bombarded with apocalyptical forecasts for the US (and the world in general!), in return, I offered her my feedback by asking 2 questions:

Developing a true international online presence by promoting a website on foreign search engines is the first step to market diversification… “Don’t put all your eggs in one basket” is a popular saying which I believe has its equivalent in all languages!

Let’s take the aforementioned example of this US-based business which was considering implementing a multilingual search engine promotion campaign in 5 languages: Japanese would mean interacting with a clientele with a buying power based on the Japanese Yen; German equals Euros; French means Euros of course, but also Swiss Franc, CFA Francs (Africa), Canadian Dollars, Pacific Francs, Moroccan Dirhams, Tunisian & Algerian Dinars etc.; Spanish “smells” like Euros, but includes multiple currencies from South & Central America, the Caribbean, as well as the US & Canadian Dollars considering the significant Hispanic online population in North America; Russian means Rubles and the Russian online market represents one of the most financially thriving online platform as a stand-alone language.

Aside from diversifying your clientele by exposing your website to various economies, reaching globally allows you to develop a presence on geo-targeted markets which might rely heavily on imports regardless of the strength of their currencies. In fact, from Africa to Southeast Asia, there are many countries in financial dire straights which depend economically on imports of goods and services of all kinds! It is often in these micro economies that success stories are still being written! However, it is important to underline the fact that not all markets relying on imports are based on “funky currencies”! Think Arabic and then access Dubai or Abu Dhabi… Bahrain or Qatar just to name a few…. These are not only the wealthiest markets in the world, but, also, Arabic online gives access to the economical platforms relying the most on imports of all nature (goods /services / technology/ talents etc.).

In spite of their motivation to develop a true international online presence through foreign search engine placement, I deal with many marketers who fear the language barrier resulting from multilingual platforms: “What do I do if I receive e-mails in Chinese? German? Japanese? Arabic? Etc.”.  Apprehending such situation is really underestimating the English language fluency of international online communities. There are millions of individuals who speak English, but who cannot find your website since over 99% of them conduct their searches on foreign search engines using keywords in their mother tongue. It does not mean that because someone in Germany types your keywords in German on the German Google that such person does not speak English. The same applies for all languages. Again, 99% of all users type keywords in their mother tongue, and this is why it is crucial to have an online presence on major foreign search engines for a true global reach. Once again, increasing your online presence internationally is not about dealing with users in their mother tongue, since most international business is being transacted by individuals accepting English as THE International Language for global communication!

Regardless of your marketing budget, International SEO is your first-step-gateway to economic salvation through market diversification! When “the recession knocks at the door”, your business strategy should be adapted accordingly. Think of times when the economy was stronger: maybe reaching multilingual online markets then was regarded as an “eventual” added value to your business…maybe not a priority in your scale of marketing consideration…something to put on the “back burner”. The economy has shifted…the time has come to go global while staying local. In other terms, you do not need a global presence to develop true international online market shares! Once again, allow me to emphatically reiterate that although an overwhelming percentage of all initial searches are conducted using keywords in the mother tongue of the user on local search engines, do not underestimate the English fluency of your international audience. Think Global…Think Multilingual SEO…Think International Online Presence…
Think Multilingual Online Markets!